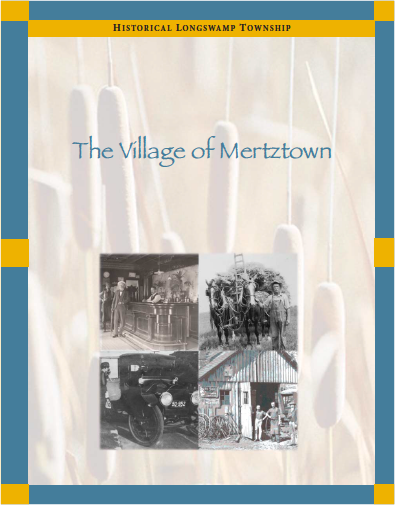 Mertztown lies along the road known today as State Street, to the east of the village of Freehall and the borough of Topton and west of the villages of Longswamp Centre and Lower Longswamp. While the person for which the village is named could not be verified by the Mertz family genealogist, documentation indicates Nicholas, David and Peter Mertz were early settlers to the area (arrived in Philadelphia in 1733). Land parcel data also show land in what is now the Mertztown area that was deeded by Peter, Nicholas and David Mertz. A Wikipedia posting claims (without offering evidence) that Robert Mertz is the namesake of the village.

The area of the village consisted, in 1876, of several dozen homes and businesses. Shortly thereafter, it grew into a thriving business center, especially after construction of the East Pennsylvania Railroad was completed (1859). Had it not been for a tragic fire, in 1903, which destroyed every single business and home in Mertztown, the rural fabric of the village—and the entire township—may well have been forever altered.